Sean Perry continues to make a name for himself in 2021. The high roller regular added another notch on his belt Thursday afternoon with a $206,500 score for winning the 2021 Poker Masters Event #2: $10,000 No-Limit Hold’em.

In doing so, he gained 206 points in the PokerGO Tour leaderboard presented by Guaranteed Rate, bringing him to 2,260 overall (second place), 772 points behind leader Ali Imsirovic, who already has 10 high roller titles in 2021.

Following Wednesday’s Day 1 session, which played down to the final six, Perry held a commanding lead — nearly 2-1 in chips over everyone else. But he was up against some difficult competition, including Daniel Negreanu, Jake Schindler, and Sam Soverel, for starters.

Despite starting the day last in chips, Negreanu went on a run, starting with a double up against Soverel when his Big Slick held up against ace-queen.

He would eventually bust in third place, good for $103,200, his first cash in the series a couple of months after being crowned PokerGO Cup champion. Soverel was left short following that hand and would soon be eliminated in fifth place for $68,800. 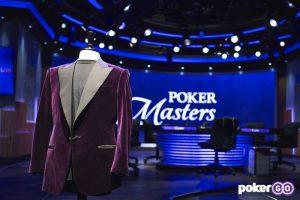 At the final table, he did nothing but play a big stack to perfection. He held onto the lead throughout and held a 2-1 chip advantage when heads-up play began. Ausmus made a bit of a run to close the gap, but the tournament came to an end when a bluff with queen-high didn’t get through.

On the river of a board reading {a-Clubs}{2-Clubs}{9-Hearts}{k-Hearts}{6-Diamonds}, Ausmus gave it the old college try by shoving with air ({q-Hearts}{j-Hearts}). Perry, decked out in the Hanukkah version of an ugly Christmas sweater, briefly went into the tank before making a nice call with {k-Diamonds}{j-Clubs}. Had the bluff been successful, the stacks would have been almost identical. But, alas, it didn’t work and Perry became the second Poker Masters winner of 2021.

Event #3: $10,000 Pot-Limit Omaha also got underway Thursday at the PokerGO Studio in Las Vegas. What started with 69 entrants on Day 1 is down to six. The final table on Friday begins at 1 p.m. PT with Chris Brewer holding the chip lead. Jake Daniels, Jake Schindler, Brent Roberts, Adam Hendrix, and Matthew Wantman are also chasing the $186,300 first place prize.