A new first-time champion has been crowned during the 2021 GGPoker WSOP Online Bracelet Events. Out of a field of 1,064 entries in Event #28: $2,100 Bounty Championship No-Limit Hold’em, it was Dominik Panka who prevailed and collected his maiden gold bracelet. The tournament created a prize pool of $2,128,000 and Panka earned the biggest slice of it for $185,228 after defeating China’s Fengdian “Shandongmenghu” Wang in a short-lived heads-up duel.

Prior to his victory, the 30-year old had 14 WSOP related cashed to his name for more than $126k in total. However, on the live poker itself, Panka has already cashed for more than $3.1 million to his name which puts him in third place on the all-time money list for his home country. It was also the third WSOP gold bracelet for a player from Poland during the ongoing online series after the victories of Bartlomiej “chester20o” Swieboda and Kacper Pyzara.

Only 22 players returned to their seats and it didn’t take long for the action to pick up. Panka was among the shorter stacks with 18 blinds for the first level of the final day and plummeted further down the leaderboard while several other contenders hit the rail in quick succession. However, he then doubled through Nir “NIRUSHHH” Amar and Arkadiy “Kamsky” Tsinis before knocking out Tsinis with kings versus ace-queen.

From there on, Panka remained near the top and entered the final table second in chips behind Natalya “Nikitina N1” Nikitina. Vincent “Moist” Huang had dominated the early stages and earned several knockouts to boost his bounty tally. The Aussie was then eliminated by Panka when ace-ten suited found no help against pocket jacks. Panka continued to shine as he also claimed the bounties of Noam “silverplat” Makavy and Chris Moorman to take over a comfortable lead. 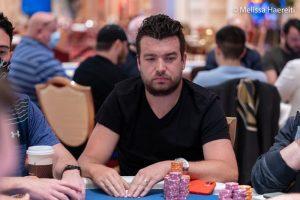 Nikitina had to settle for fifth place and was followed to the rail by David “Mclovin86” Mzareulov in fourth soon after. The lead of Panka was still unchallenged by then but three-handed action saw several changes with all three contenders taking turns at the top of the chip counts. Down to as little as 13 big blinds, Panka staged a comeback to retake the top spot while Fengdian “Shandongmenghu” Wang ramped up the aggression and knocked out Nir “NIRUSHHH” Amar.

The heads-up duel was a very brief affair and lasted all but 12 hands. Ultimately, it was a classic flip that got the chips in the middle and the ace-jack of Panka rivered broadway to seal his victory.

That wraps up the PokerNews updates for this event but the final week of the international 2021 WSOP Online Bracelet Events will be as busy as it gets with another six WSOP gold bracelet winners to be crowned.