“CrazyLissy” of Russia overcame the dominating Day 3 chip lead of Stevan “random_chu” Chew to battle back from a significant heads-up disadvantage to come out victorious over Pascal “Pass_72” Lefrancois in a wild finish to a day that took nearly seven hours to complete. The victory by “CrazyLissy” in the WCOOP 91-H: $5,200 NLHE Main Event of the 2021 World Championship of Online Poker (WCOOP) is good for a top prize of $1,499,942.

Players started cautiously at the final table and there wasn’t an elimination until “Rebel FishAK” eliminated Tyler “Juicy_J_93” Jardine with ace-king 90 minutes into Day 4. Chew remained in control throughout the early part of the day, finding kings for the elimination of “neczaidziai” in eighth and a broadway straight to knock out Markus “playboy99999” Prinz in sixth. The elimination of Marco “marcozevola5” Zevola in fifth place put Chew above 200 million with more than double his nearest competitor, but that’s where things got interesting.

The leader opened up the lead further in the early parts of final four action, getting to near 300 million before “CrazyLissy” doubled through Chew on a set of threes and then again with pocket aces just moments later. Just as quickly as final four play had started, “CrazyLissy” took a big chip lead and Chew was down below 100 million.

All four players exchanged the chip lead during final four play, but it was “Rebel FishAK” that fell first when “CrazyLissy” made three jacks on the turn. Lefrancois battled back in three-handed play by doubling through “CrazyLissy” and taking out Chew in third place with pocket eights.

Lefrancois entered heads-up play with a significant chip lead and pressed it even further when he took down an early pot with a big river bet. But “CrazyLissy” doubled early and then found a series of successive medium pots to bring the competitors near even. The comeback run was completed with a jump into the lead on a big river bet and Lefrancois’ advantage was gone.

Lefrancois briefly regained the lead but almost immediately ran into the pocket tens of “CrazyLissy” and a ten on the flop all but did it for Lefrancois, who was left with less than one big blind. It was all over on the next hand and “CrazyLissy” completed the improbable comeback victory to win $1,499,942 and a WCOOP main event title. 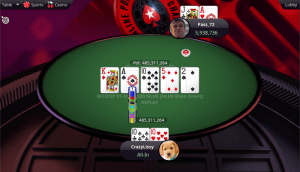