After Sam Greenwood was eliminated on the bubble, Eelis Pärssinen was the first player eliminated in the money in ninth place. Sami Kelopuro soon followed, eliminated by Justin Bonomo, as Jason Koon led the final seven players in the Super High Roller Championship.

Having lost a flip to Bonomo, Pablo Brito Silva was sent to the rail in seventh place by Koon who continued to dominate final table proceedings. Artur Martirosian had started the final table second in chips, but soon fell against Koon who flopped a full house to eliminate Martirosian.

Another elimination soon followed for the former partypoker Ambassador, with Vyacheslav Buldygin losing a flip with pocket eights to bust against Koon who had now eliminated five of the last six players.

However, just as it seemed like it was Koon’s tournament to lose, momentum quickly shifted in the favour of Ole Schemion after doubling through Koon with kings against jacks. 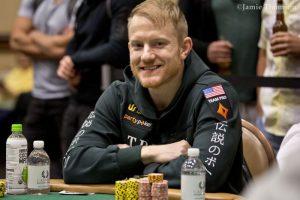 Both players remaining had their eyes firmly set on the WPT Super High Roller Championship title and the $388,708 prize money that came with it

All eyes are now on the $5,300 WPT World Online Championships Main Event, with two more starting flights. The next one gets underway on September 12 with plenty of satellites available, including a 50x $5,300 seat guaranteed Mega Satellite at 4:05 p.m. BST on September 12. It costs $530 to enter, but you can play your way into it from only $0.01. in the partypoker client.